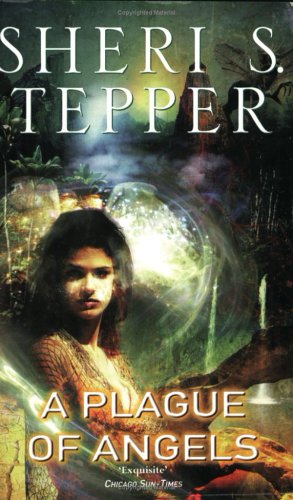 My second Tepper read was succulently good! I wanted to savor the book, so I took my time with it. I am sharing my favorite parts of the book here like I do in most reviews. However, this time, I have chosen 6 quotes that sum up how I felt about the book.

Sometimes, it was the way the author described an emotion, such as the horror that a character felt when the Witch took her mask off.

Other times, it was how a character expressed a philosophical thought about gangers simplifying language to such an extreme that they started looking down at poetry and literature. The quote below reminded me of the restrictions being placed on characters in the novel 1984.

If you take out the different words that describe completely different things that are also the same, what are you left with? For instance, I think love when I read the word, red. I don’t think that when I come across scarlet because I associate it with scandal. Then there is crimson, which reminds me of blood.

Then there were times when a character stated the truth in the simplest manner. The line is easy to miss with so much else that is going on. Yet, if you stop and think about it, there is depth in those words. Two particular examples that made me shudder are mentioned below:

As were the times when a character who is still young and inexperienced said something profound. I went back and read this quote multiple times because it resonated with me. If you find it touching your heart too, you might want to check out my review of The Handmaid’s Tale.

Finally, there were some parts that sparked something in me. While reading them, I thought I could base my next story on these lines. I find that the books that end up on my favorites’ shelf have that in common. I think that each line in those books could be hiding a story in itself.

I would very much love to read the second book in the series even though it would be lacking one of my favorite characters from this one. Care to join me for a buddy read?