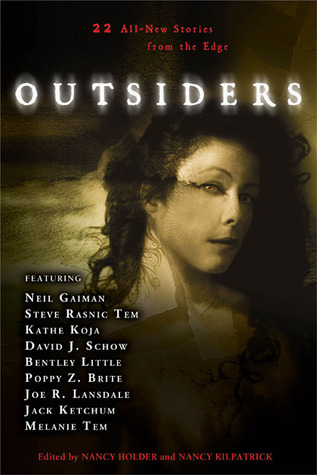 Below, I mention how I liked each story and include a favorite quote:

The Empty Chambers by Neil Gaiman

A poem. Very creepy but I’d rather have read a Gaiman story.

The Company You Keep by Steve Resnic Tem

Walking among us are the members of a secret company. I don’t know what I took away from this story if anything.

Scarabesque: The Girl Who Broke Dracula by Tanith Lee

This was actually an excerpt from one of Tanith Lee’s novels. It was also the first time I read anything by her. I liked the imagery that her words created. For instance:

Under the Needle by Lea Silhol

You’d appreciate this story more if you focused on how it was written rather than the plot. I did and I ended up liking it!

A literally visceral story about a man who discovers his remote can do much more than change channels!

Cat and the Cold Prince by Freda Warrington

A story that brings to mind dictatorships and restrictive regimes, such as the Prohibition in the Cromwell era. Oh, and a girl falls in love with a tiger!

This one was about a splinter group of people who left their human status behind by choice fighting for their rights.

Lighten Up by Jack Ketchum

The beginning of the story is set up to deceive the reader. The end is one of the saddest endings I have ever read!

The Country of the Blind by Melanie Tem

A blind girl will accept you into her family but she needs a sacrifice first.

A hidden cult in the midst of the society and a boy with a dying mother looking for a place to fit in.

Running Beneath the Skin by Brett Alexander Savory

Can you even said to be alive, if your insides have been replaced with metal? No, this isn’t about Wolverine!

There’s necrophilia and there are grim peepers. Read this story, if you love being grossed out.

This story is based on a certain type of “outsiders” who like to watch accidents.

A planned hit where the hitman isn’t on the complete plan.

…And the Damage Done by Michael Marano

Beautiful imagery is one of the characteristics of this story. The other is heartbreak!

Pop Star in the Ugly Bar by Bentley Little

Simply gross but a fitting addition to this collection. A wannabe pop star ends up in a gore-hardcore bar. She doesn’t make it out.

A teenager’s depression comes out to play!

The going ons in a restaurant with some very interesting characters thrown in!

If I Should Wake Before I Die by Brian Hodge

Expectant mothers miscarry all around the world. No one knows why until we reach the end of the story…*shudder*

A sad story about the dreams of those below being crushed by the powers that be. This line from the story says it all:

The Shadows, Kith and Kin by Joe R. Landsale

Lighten Up by Jack Ketchum

Have you read this anthology? Which ones are your favorites?