Who Can Replace a Man?

As the human civilization collapses around them, the robots try to race their way to freedom. Read to find out, if they succeed!

Not for an Age

Get a glimpse into the lives of people who lived in the past. Like literally!

A father reaches across the boundaries of space and time to impart wisdom to his newborn kid.

Four people are trapped in a house. Or are they?

A sort of apocalypse is caused by the use of sound as a weapon.

The human race is drafted by another superior race to help the Failed Men from becoming extinct. Sometimes, ignorance is bliss. At other times, it can turn you into a nervous wreck!

An excerpt that I loved:

Surrey was silent a moment, surprised to hear pride in his own voice. Pride left, after that experience! Yet there was no pride in him; it was just the voice running in an old channel, the naked soul crouching in an ancient husk of character.

A hunter may hunt as many animals (dinosaurs in this case) and yet the act won’t give any meaning to their otherwise inane life.

And a quote that I think all hunters should be made to read:

Those century-old lights, dim and sacred, go out with no indecision. These cloisters are closed till Judgment Day. Your reflection is torn and bloodied from them for ever. Over their ravaged panes nictitating membranes slide slowly upwards, like dirty sheets covering a cadaver. The jaw continues to munch slowly, as slowly the head sinks down. Slowly, a squeeze of cold reptile blood toothpastes down the wrinkled flank of one cheek. Everything is slow, a creepy Secondary Era slowness like the drip of water, and you know that if you had been in charge of creation you would have found some medium less heartbreaking than Time to stage it all in.

Those more suited to cerebral pursuits have formed a separate group called the Cs. But nothing is ever enough for man and this time, he wants to create geniuses without pesky notions, such as fear and morality to stop them.

A murder takes place on board a spaceship while it is trying to escape the gravitational pull of the Impossible star.

Britain declares neutrality in the American-Chinese war, which leads to some of its own citizens rebelling against it. The twist at the end was a lot of fun!

Humans have vacated the Earth and sentient animal-like beings populate it now. This is the story about one of them. I loved two things about it:

A Kind of Artistry

A new living and sentient entity called the Cliff has been born from a non-living asteroid. The story is about a human’s attempt to contact it and bring back a sample.

What I loved about this story is how it challenged another one of my presumptions. If Man will change the world, shouldn’t the world change him too? 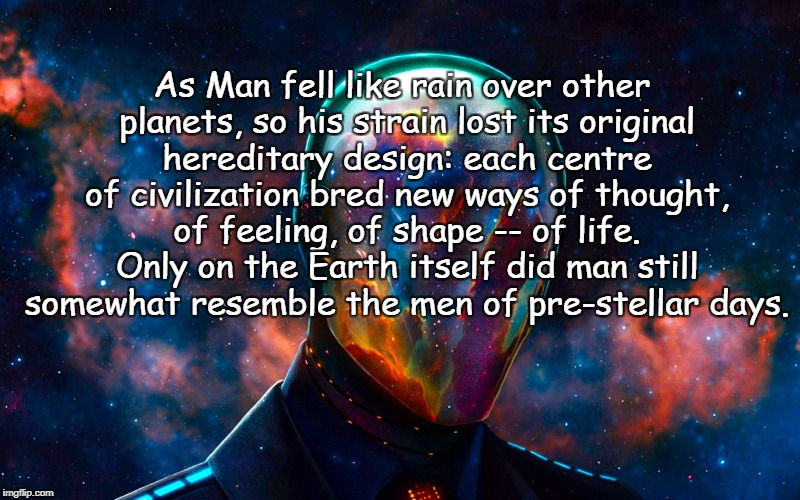 Man in his Time

A man becomes out of sync with time on Earth after spending some time in space. While he treats his life like a science experiment, it is especially hard on his loved ones.

Kind of reminded me of the whole science has consequences mindset that Mary Shelley was in when she wrote Frankenstein.

While I wasn’t blown away by this anthology, it has given me ideas for future stories, things to think about, and challenged some of my previously conceived notions. What else should I expect from a good book?